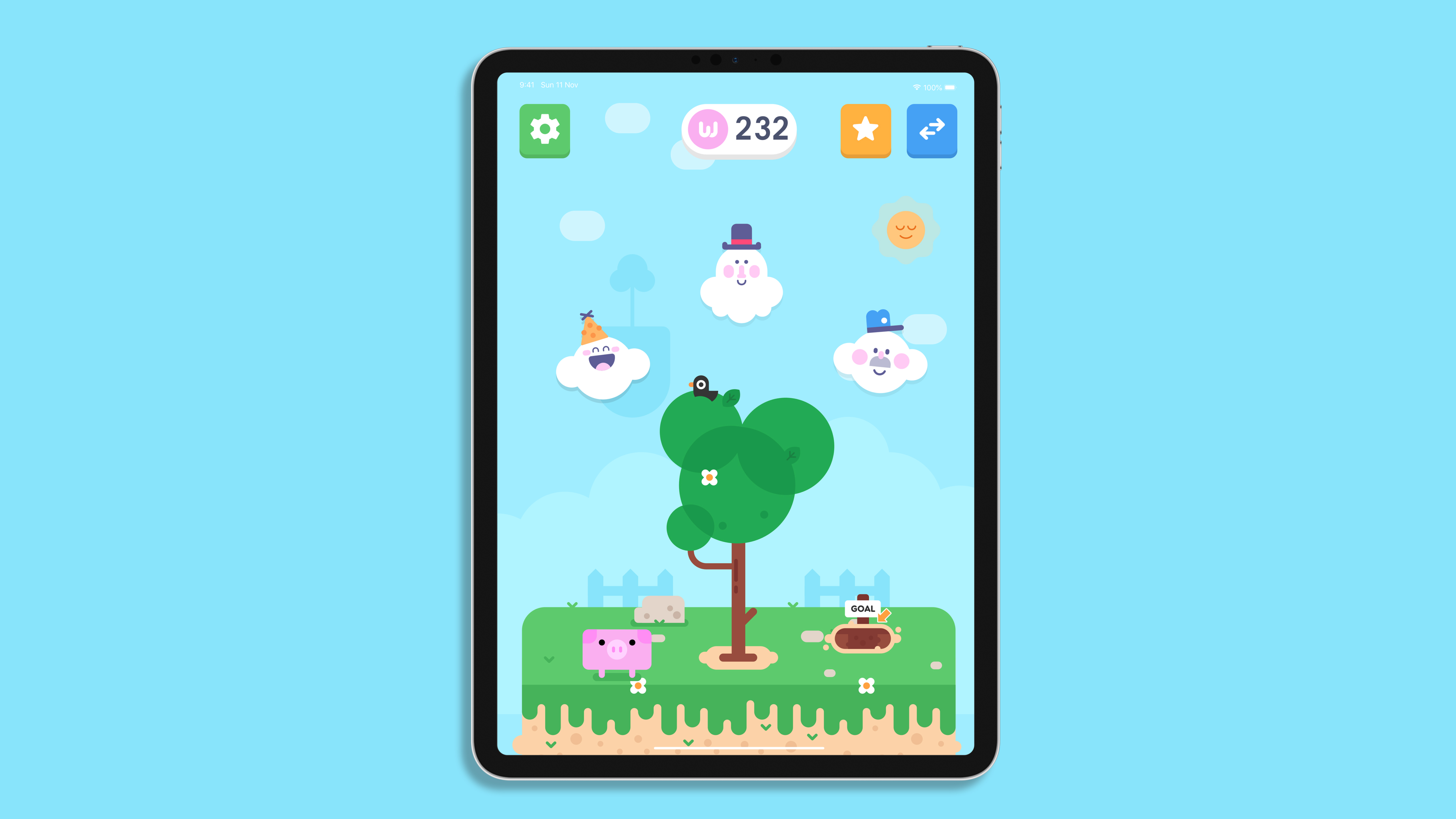 Pigzbe is a digital banking app for kids aged 6-10 that runs on a cryptocurrency called 'Wollo'. Before joining Pigzbe, CEO Filippo Yacob and a team of contact designers developed the first version of the Pigzbe app.

The app began as a video game, but following research, we identified the product wouldn't survive in the gaming landscape and would stand a stronger chance as a money management app with gamification elements.

My role was to explore opportunities for improvement in the kids' section of the app. In addition to redesigning how money transfers work, I also explored other features, including the tree and savings goals.

Being an early-stage startup limited how much research we could do to guide our designs, meaning we could only run small qualitative rounds of testing, but not large-sample, quantitative studies.

The main feeling from reviewing V1 of the Pigzbe app was the Cloud Architecture was overcomplicated. V1 of the app had clouds ordered chronologically which meant gifts or allowances could be hidden deep amongst chores, requiring lots of scrolling to find them.

I chose to simplify this architecture by creating three types of clouds; allowances, chores and gifts. This worked better for two reasons:

2) Having a chore cloud allows the child to review their chores all in one place and decide which to do; this was an insight we uncovered from visiting families, we found many use chore charts in the home. Allowing kids to decide which chores to do and keep track of them.

Working with Pigzbe's Visual Designer I sketched a user flow to explore how the clouds could work. He then took these sketches and turned them into high-fidelity designs.

Following this, I used the screens to build a prototype using Invision to test against kids.

Putting it to the Test

Using a screen survey I found 5 families with kids that matched our target age range of 6-10 years old. Liasiing with them, I arranged in person testing sessions of around 20-30 minutes with each participant receiving a paid reward of £25 for their time.

Sessions were conducted using lookback to record the screen activity, the participants expressions and what they said in the session. This allowed me to focus on the participant  and review the footage post-session to make sure I hadn't missed out on any observations.

While the testing did go positively, I uncovered that only 1 of the 5 kids realised that the chores were paginated and they could review them by swiping.

Instead the majority of testers would rain each chore at a time. This defeated the purpose of what we'd designed. We wanted to replicate chore charts where the child can review their chores and decide what to do.

Post testing, I created a usability report to present to the product & dev team. The aim being to discuss testing insights and ideate solutions.

The observation was that each cloud modal had an abundance of information already; task, task name, task value, task assigner, task assigner image, rain it button and tiny pagination dots at the bottom.

We agreed that the simplest and quickest  solution would be to integrate arrows onto the sides of the cloud modals.

I quickly mocked this up in Sketch and built another prototype to test a second time round.

We integrated the new design into our next testing prototype and tested it for a second time. It was a success and there was an increase in testing participants using the left and right navigation buttons to review their chores before completing them.

In addition to insights focused on the clouds I uncovered other insights in the app testing during my time. This example shows the onboarding redesign, the original design was very text heavy. Testing showed kids skipped this not bothering to read and as a result unable to explain the concept of Pigzbe.

Working with the visual designer we redesigned the onboarding to be more visual and simpler, the second time round this tested a lot better with the majority of participants able to articulate the purpose of the app.

Another insight focused on the avatar selection feature. Originally this was for parents to do when setting up their childs account, however the majority expressed they would like for their child to do that.

Even though there were technically no problems testing this it was important to listen to the user. This feature was moved to the child section of the app where the child could select their own avatar after creating their password.